I fear I'd soon get the tag "Naked Journalist", but yes I'm in my yard Naked as usual..my room looks like shit cos i haven't bothered to clean it this week and i'm pacing around writing this piece on Reezy
who luckily isn't having to see all this cos we having this interview over the phone. But I'd give you a little description of probably what Reezy looks like right now or is doing..My bet is, he's on his favourite bucket hat.. his moustache ever evident and a present constant in this interview..of course he's got a stick of weed in between his fingers and takes a puff before answering my very first question.

Reezy, born Shamedje Efetobore Jeffery hails from Delta state, an Urhhobo boy to be precise, but he grew up in Benin as an only child...

For most of his formative years he didn't like being an only child and craved having a sibling, something he wouldn't get but a relationship he eventually went on to find in the streets.

He says his family was okay so yes
They weren't on the poor side per se. 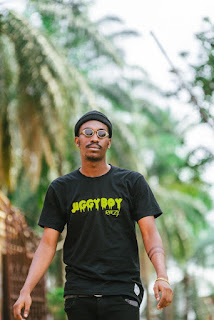 I go on to ask him about how he found music and his music influences.. he says he grew up in a home where music was a thing, his father being a fan of the Jackson Five, Micheal Jackson, The Great Fela and also a big fan of the then group plantashun boys.

I begin to wonder how all that played a role in him finding a hiphop sound and he goes on to tell me about how back in secondary school "Hip-hop was the shit" and basically everyone wanted to rap.. with an excitement in his Voice, he recounts how much of an influence Lil Wayne was on him..he even goes on to give us a little peep into his first stage name which beared the Prefix "Lil" a clear indication he really wanted to be somewhat like lil wayne.

I ask him about his present inspirations and he mentions Drake,Travis,Roddy...he mentions a couple others too but there's a pattern to how and who he gets his inspiration from. It's clear he wouldn't be stuck in the past or on old sounds, he's always going to be very aware of the present. Reezy goes on to talk about the essence of making music with love, and how it's key to evolve with the times. Asked if he is a rapper or a trap artiste he states he'll always be in the hip-hop zone either rapping or trapping or even creating a new sound out of that but he'll always be hip hop aligned. He also says he draws inspiration from other Sources of music and wouldn't mind making music of another genre. 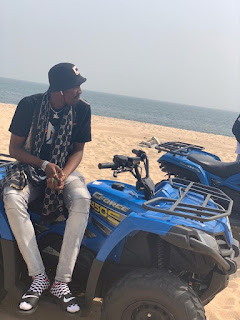 We take it aback a little and we discuss his first big break, Reezy sounds more grateful than proud talking about it..He mentions how he had gone on a year long break only to return with the song "Bag" and the reception was a lot more than what he had foreseen or thought could happen, he gives a shout out to his fans and everyone that encouraged him to get back and he also makes sure to credit the producer Stretto for a job well done.

As the interview comes to a climax i ask about new projects and what to expect from the brand Reezy. He mentions work on his Extended play Project has begun, promises a couple big name features howbeit maybe not in this particular project but in the nearer future. Reezy seems quite optimistic and ready to dish out beauties to his fans i believe it's going to be a beautiful year for the artiste Reezy.

Thank you for reading this far... I remain your favourite fraudulent Pen/wordsmith