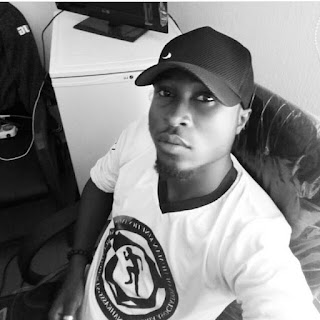 Few weeks ago, Just after the release of the PVC Freestyle by Hip-hop Hop Artiste, REEZE.
The PVC Challenge was introduced and this was aimed to motivate youth in getting their PVC ahead of the 2019 Election and Prizes and giveaway of 10,000 and 100,000 Cash Prize was promised for the video with the highest views.

Competition which was however peaked for the winner to go home with the Sum of 100,000 was really intense as competitors made more effort to get the reward, engaging and raising awareness for support from Friends and fans.

The Competition seems however to be a fluke as the Original and Deserved Winner,  Mr Micheal Ireogbu CEO Mazzi Management who Engaged in the Trends and also was consistent, raising the bar, amassing over 500+ Likes wasn't awarded. 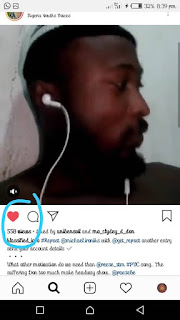 Mr Micheal Ireogbu who  acknowledged the respect he has for The Talented Artiste, Reeze, appreciated those who supported the trend while it lasted also said he controversially lost despite having the highest likes and views 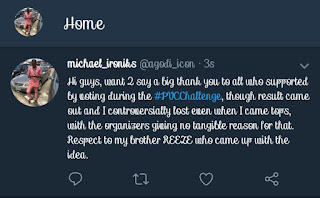 I want to say a big thank you to all who liked and commented on my page in the PVC challenge, The result came out and I controversially lost, when I obviously had the highest views and likes.. But thank you guys you showed me love immensely.
Much respect goes to my brother my ride or die, my friend @⁨Reeze⁩ who tried to fight for what's right but was powerless.. No worries I gat you blood.. Front still dey..