VARSITY GIST: HIGHLIGHTS FROM CONTROL THE ECONOMY TOUR WITH CBN IN UNIVERSITY OF BENIN (SEE PICTURES AND DETAILS) 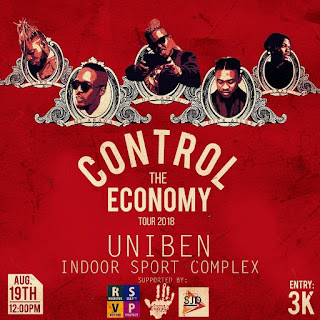 The A- List Event which was earlier scheduled to hold on Sunday 19th August, 2018 didn't go as planned due to Improper Logistics and as the time MI ABAGA and Other Acts arrived at the Venue, It was already Closed as Student Lost Hope of CBN actually coming through.

This however in hopes not to let the Student Down, The Chocolate City Team came through on Monday 20 August,  2018 to Give an Awesome Show to The Student of University Of Benin and Best Believe it was Mind-blowing.

Highlights-
• DJ LAMBO holding down the wheels of steel and having the student rocked on for few minutes to lots of amazing records, old and new was just the perfect way to kick off.

And For the Love of Hip Hop, DJ LAMBO Made Request for two Rappers who could do it for the Culture and Guess not cause T KRAYNE and YUNG HYPER Surely held it down.

• Next Up - Fast Rising Singer, UPDATE was Introduced to the Stage to give an awesome Performance.

• This however led to DJ LAMBO introducing one of the Fast Rising Group  from Chocolate City, STREET BILLIONAIRES. They Surely delivered an awesome Performance and Best Believe the Female Rapper, CANDY was definition of Awesome. This would interest you, the Street Billionaires seems to be a Fan of Nike as they showed up and had those Nike on display.
Great performance, and That is what we all can attest to. 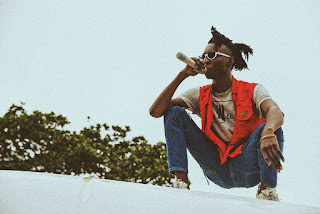 • Hip Hop raised his head and waved as DJ LAMBO made the call and introduction for the Next Performing Act, BLAQBONEZ, This definitely raised the bar higher as just when we were expecting to See on Stage, The Talented Rapper took the stage Higher Literally, Performing A Single off his BAD BOY BLAQ Album titled DENIED and This was just the beginning of his Greatness as he introduced his act to the stage and showed off a couple more bars, then gave it straight up to Performing PLAY and BAD BOY and with that, He gave his thanks and yes he did prove, it wasn't all hype when LAMBO Called this Young Bad Boy Blaq the Next MI ABAGA, it was just FACTS!!.

• The Buzz and Energy was just still Smooth, when DJ LAMBO introduced The Finest out now with the most Played Record, CONTAINER DON LAND? crooner CKAY, who graced the event with his awesome moves and performances.

• We might not have seen this coming, but we however got stunned when PRIME TIME & HIP HOP LEGEND, RUGGEDMAN took to the stage and boy oh boy, there was Joy on Every Face as he threw up back to his Classics and down the memory land of good songs.

• At This Point, we knew it was time and yes, The Mr Incredible 'MI ABAGA' Stepped on stage and this led the crowd to a whole new dimension as Hip Hop Gained Consciousness in his presence. Giving every piece and dose of every Classic and Student reciting every word and lyrics tied with Flows and Energy. Make Up Artist and Student Ese Taga  (Billz Beauty Affair) also stole this opportunity to show and have a wild time with MI ABAGA, whom in return gave her a Ring as a Thank you Gift for Supporting The CBN so far.
Amazing is definitely an Understatement and IMO this was just the height of every concert.

CBN has definitely being around for a long time and surely just one remark is evident and that is they know how to deliver and also give a wild performance.

Rounding Up, it was an awesome Show. I enjoyed myself and I Hope You did.

More Pictures would be Updated Soon 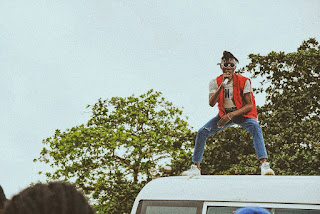