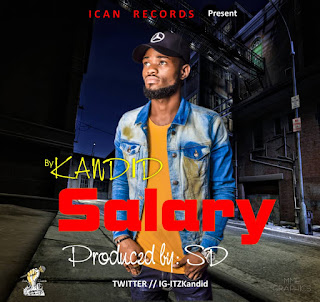 Music in its complexity is definitely a tool for everyone and anyone who can relate with it in its own way. Singer and Performing Artiste known by his stage name, KANDID
definitely has found one way to tell his own story through music. Releasing his official debut single titled SALARY, The fast-rising Singer took his talent to appreciate the ones who have been there for him through his journey in the industry and life at large.

The Singer and Performing Artiste, Kandid let us in some exclusives on the inspiration behind the song, when it was recorded. Song was recorded on April 27, 2018, Art Cover by MME PHOTOGRAPHY, Produced by SD

He also gave credits to Emperor Gemstone, Mr Eddy, Mrs Gloria Antony, Sammy Lee, Mr kephas for their participation and support towards the release of this song.