THE CRITIC: SYDNEY TALKER x HARRY CARTER - THIS IS UNIBEN (A PARODY VIDEO OF CHILDISH GAMBINO'S, THIS IS AMERICA)!!!! 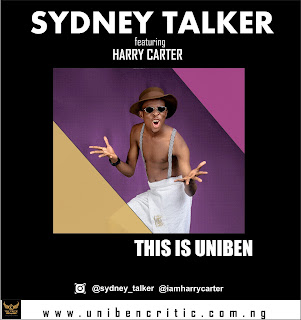 Comic and Popular Comedian and social media geek, SYDNEY TALKER who is known for his Comic skits and dance cover
has definitely topped the score and raise the bar to another level.

Though still enjoying Falz the Bahd Version, Sydney Talker links up with one of the Most Amazing Hip Hop Artiste In University of Benin, HARRY CARTER to Create a one minute masterpiece 'THIS IS UNIBEN'.