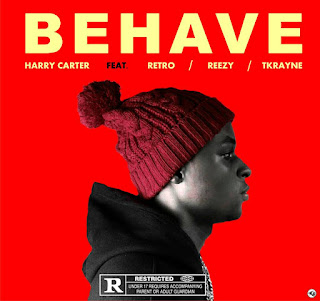 Fast Rising Rapper Harry Carter combined forces with 3 incredible Cool cats Retro, Reezy and Tkrayne
whose fan bases are on a rapid rise and made a smashing Hit with the help of the Mad Producer Zevrst, and the Mixing and Mastering prowess of Jake chowman. News around is he is working on an album or an EP but no one knows for sure. According to his words he named BEHAVE "The Calm Before the Storm" meaning he has been working with top artistes over time and he is just waiting to release his work. Could it be A list or a B list artistes? Who knows but for now,


Thrill yourself to the fascinating New Jam "BEHAVE'

LYRICS TO BEHAVE BY HARRY CARTER

Motivate set the records straight
I got demons let me demonstrate

Boy I came with the whole crew you know that you better behave.

Then I laid back on the Bed
I changed the topic and said..
Every redbone I know I have Dickmatised
She said she don't like getting stigmatized

I be like Lil Kesh,cause I don't really roll with fuck Boys uh
Cause all these niggas they acting like bitches they prolly do Fuck Boys uh!

I say a prayer for my enemies
They cannot slow down what's meant for me
Another prayer for d haters boy. Reading their minds like telepathy
I got more lines than plain geometry
All these niggas cannot talk to me

Motivate set the records straight
I got demons let me demonstrate

Boy I came with the whole crew you know that you better behave.

Don't miss out on WhatsApp